The Correct History of Autocorrect 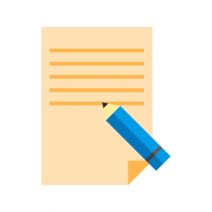 Autocorrect. The world takes it for granted now, but at times, it can be as furious as it is fasting… err, fascinating. It plays such an integral part of our everyday lives, yet how much do you really know about this software?

For example, how many of you actually know how autocorrect came into existence? We bet even less of you know how autocorrect chooses the correct spelling and grammar for each word and phrase out there. Autocorrect was born from a feature that had already existed in Word, which was a glossary of sorts that acted as an auto-expander. With this, you were able to expand existing text with other things, such as a replacer for a company logo.

This method utilized script in the programming, but the pioneer of autocorrect, Dean Hachamovitch (former corporate vice president of Microsoft), realized that the glossary could be used in many more applications. The first word targeted by autocorrect was destined to be teh, a commonly seen word amongst Internet memes and illiterate people worldwide. Hachamovitch crafted a script which would fix this spelling error when you pressed the left arrow key and F3 simultaneously. Perhaps his biggest revelation was when he noticed that English is a very space-oriented language, and that he could trigger the autocorrect to happen upon hitting the spacebar.

Afterward, it was simply a matter of figuring out what the most commonly misspelled words were. Some of XFER’s favorite misspellings are as follows:

Of course, whether or not a word should be fixed in autocorrect boils down to how often it’s used. Additionally, Microsoft can’t go around recommending obscenities for corrections. Obscenities are labeled as words that aren’t flagged or suggested. Other words are determined by a number of different factors:

What this means is that most words are judged by how popular they are in the context of language and sentence structure. This is also known as the battle between prescriptivism and descriptivism; how words should be used and how they are used in practice. Just because a word is used often doesn’t mean that it is the proper way of using said word.

Has autocorrect made humans lazy? We at XFER don’t think so. If anything, we have to be even more careful about what is typed out, as a single error can be detrimental and embarrassing. Call XFER at 734-927-6666 / 800-438-9337 and we’ll work with you to prevent IT hiccups that could be punishing.

Facebook Twitter LinkedIn
Tags:
History Automation Programming
Tip of the Week: Try the 52-17 Rule to Get the Mos...
2/3 of Fired Employees Can Access Their Former Com...