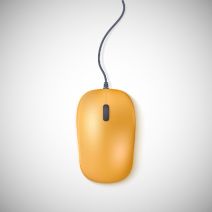 Any user of technology knows that it’s important to optimize security on all fronts of your business. The only problem with this is that passwords aren’t as secure as they used to be. Many businesses have moved in the direction of two-factor authentication, which requires a secondary credential in order to access an account. Did you know there’s a security method that uses your mouse’s behavior to authorize your login?

According to BioCatch, the way that a PC user uses a mouse can identify who they are. ZDNet explains:

The entire way that we use the human-machine interface embedded within each and every modern computer, browser, or website, is like a unique fingerprint. Lefties will operate a mouse differently to right-handed people, for example, and each user ‘grabs’ an icon at a different point, angle, and so on.

Essentially, BioCatch’s idea looks at the way users move their mouse to build a “character profile,” so to speak. This helps identify whether the user is actually who they say they are. In fact, it’s been estimated that this method of authentication can prevent fraudulent logins up to 80 to 90 percent of the time.

In addition to monitoring your mouse movement, BioCatch’s solution considers other aspects, crammed into four layers of properties:

Layer One: Standard Authentication
Layer one consists of the device, network, IP address, hardware, and location - all traits that physically tie you to your PC. These are the typical authentication properties used when logging into an account. The following layers, however, take a much different approach to authentication.

Layer Two: Physical Profile
Layer two consists of mainly motion-related actions, such as moving objects around the screen, hand-eye coordination, and the mouse pointer (or finger on touch screen devices).

Layer Three: Cognitive Profile
Layer three consists of examining mental abilities, such as response time and connection time. It also looks for suspicious activity that is out of the norm. One example used by ZDnet is online banking - normally, a user would check their balance before doing anything. If a money transfer is their top priority, something might be up.

Layer Four: Invisible Challenges
BioCatch’s final layer of protection is meant to authenticate a user’s identity, but not in the traditional sense. BioCatch purposely puts problems in the way of the user in order to determine who they are. Everyone reacts to potential threats differently, and their response can be used to verify one’s identity.

Will mouse two-factor authentication catch on? We don’t know; but what XFER does count on is the importance of two-factor authentication in general. Users need to have more than just a password protecting their accounts if they want to stay secure. This is especially important for any business-related material. With today’s sophisticated hacking tools and procedures, all it takes is one skilled hacker to crack a password.